First things first. The winner of the drawing for Sharp Teeth. I tried to get Dickens to pick a name first: 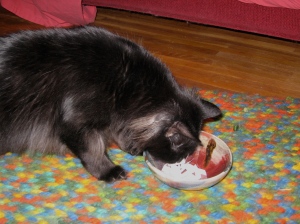 He sniffed and nibbled but didn’t pull one out of the bowl. So I had to track down Waldo. I didn’t get a picture of him selecting a name because I was too busy trying to keep him from eating it! From his maw I removed the spit covered slip that said: Litlove! Email me your address and I will post the book to you.

I took the day off from work today and my Bookman and I with books to sell and a 15% off purchase Half Price Books coupon from their calendar in hand had some fun. I thought a photo of my share of the loot would be nice but Dickens decided he had to check them out first: 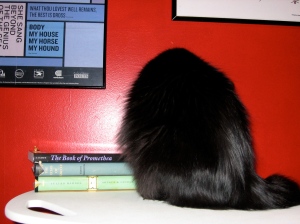 Then Waldo had to get into the act: 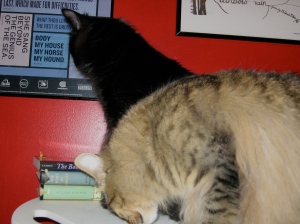 Then Dickens left and Waldo settled in for the long haul. 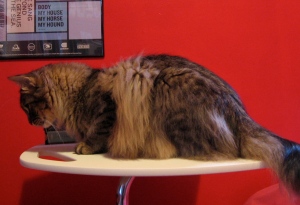 I kept nudging him suggesting that maybe he needed to go see what his brother was up to because I was certain it was something he wouldn’t want to miss. But Waldo wasn’t buying it. I had to resort to picking him up and placing him elsewhere. He was none too happy about it especially since I had already taken away is crinkly paper snack. It is not a large pile, but here they are sans cat obstacle:

There they are. There were a whole bunch of brand new Oxford Classics for about 75% off the cover price but I limited myself to the four. Don’t want to be too greedy. Or is it too late for that?