The item that I had to pre-order last weekend was ready for pick up by Wednesday. Bookman had the day off from work, and, what a trouper, went and picked it up for me from the farm store so I wouldn’t have to go out and get it on Friday or Saturday which would involve me having to drive him to work so I could have the car and deal with sale shopping traffic. What is the mystery item?

A red bin filled with peat moss and some other materials and…worms. Red wigglers to be exact, also known as eisenia fetida. The worms do not go into the garden, the worms live indoors, in the snazzy red bin in a corner of the kitchen.

Bookman did not want worms. He is a bit squeamish about them. When I was setting up the bin and stuck my hands in to mix

them up he was a bit, um, bothered by it and didn’t want me to do it. I am on happy terms with worms, I loved playing with them when I was a kid. Worms and “roly-poly” bugs (also know as sow bugs). They are cool bugs. And moths and ladybugs. And snails. Oh and I loved tormenting the big black “stink” bugs when we went camping in the desert. And grasshoppers were pretty fun too. And once there was a praying mantis — super cool. So I guess I like to play with bugs. But worms aren’t bugs, not technically, though they fall into the whole small wiggly/slimy/crawly creature category easier to just call bugs.

Bookman was not keen on having worms living in a corner of his kitchen. I teased him and said did he think they were going to get out and invade the cupboards and get everywhere like ants or something? Other than the blurry photo he took of a few of them in my hand he would never see them again.

The next morning when we got up and Bookman went into the kitchen to get coffee and breakfast going he calls me in, “Look,” he says in an accusing tone while pointing to the wiggler bin. Stretched about four inches across the top inside of the bin lid was a worm. I started laughing. Bookman demanded I get it off the lid and put it back in the bedding. We dubbed the worm Houdini and have been making jokes about it ever since.

Bookman won’t feed the worms, calls them mine, and casts worried glances at the bin now and then, but I have caught him lifting up the lid to look inside and putting his ear down close to the bin to listen. Except for Houdini’s escape attempt, they are decidedly uninteresting. They don’t like light so live below the surface of the materials in the bin and they make no noise. Waldo and Dickens, however, are fascinated by the whole thing. They check out the bin now and then and every time I add something to it they are both there supervising the proceedings.

I learned that what I am doing is indoor composting just like in my bin outside but the red wigglers speed up the process. They do not eat the food scraps I put in the bin. The worms eat the things that breakdown the food scraps. Just like outdoor composting where you want to be conscious of the nitrogen/carbon ratio, the same holds true for indoors.

The worms came with peat moss bedding which I learned is great for moisture retention but has no nutrition for the worms. Worms like shredded cardboard and newsprint. So I shredded up the black and white pages from my neighborhood newspaper, got them wet, squeezed them out, then spread them across the top layer in the bin. The newspaper is good carbon and will offset all the nitrogen from the food scraps. There are about 500 wigglers in the bin and I can feed them up to a pound of food scraps a week. So far I’ve given them some potato peels and coffee grounds along with the unbleached paper coffee filter. Yum. In four to five months I will need to remove the compost and give the worms fresh bedding to start over in. With luck they will be happy and healthy and multiply enough that I can eventually start a second bin. My garden is going to love the worm compost.

Bookman is not too upset about the worms because while he was at the farm store he got me an outdoor garden present: 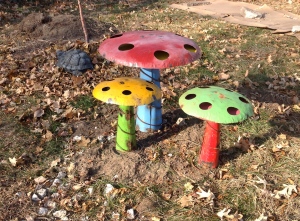 Aren’t they fun? Not sure if that is the location they will stay in come spring, but wherever they end up, I’ll be planting some low growing things around them, some thyme maybe, low bunching grass, small flowers. Now all I need is a caterpillar with a hookah!

20 thoughts on “Meet the Wigglers”