A hot day today with extremely high humidity makes it an impossible day to garden. Even going out to hang laundry to dry I am soaked with sweat within minutes. In spite of the breeze the air is oppressive and I get hotter and hotter so that returning indoors feels so very good. It is unfortunate to not be able to work outside as there is so much to be done, so many weeds to pull. There are peas to pick as well but it is just too hot. Perhaps later this evening before the thunderstorms arrive there will be a bearable window for pea picking.

All the black raspberries have been picked and we have a very full pint. So many have mentioned they had ever heard of black raspberries before and wondered what they taste like. They do not taste like your regular red raspberry, not even close. The nearest thing I can liken their flavor to is concord grapes; sweet but a little tangy too with perhaps a hint of blueberry. How’s that for a precise description? Someone totally needs to hire me to write for their garden catalog!

I’m still picking gooseberries, a few every couple days. I think by the end of the week I will have them all 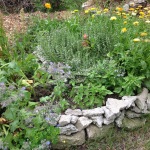 picked and then it will be time to figure out how to make them into jam. I picked the few remaining red currants and popped one in my mouth to try. They are supposed to be not as tart as black currants. Now I have only every eaten black currant jam and had dried black currants, nothing fresh picked. The red currant was tart but not unpleasantly so. What was a surprise was the seeds. Three or four rather large ones. Currants are small enough as it is, now I find out they are at least half full of seeds inside. The red ones are anyway. I have not yet had any fruit on my black currant. So when jam making with the currants, gooseberries and elderberries, I can look forward to straining out seeds. It had better be worth it!

With this heat the zucchini is really taking off and is covered in yellow blossoms. The cantaloupe is flowering too. And finally the tomato plants we started from seed are growing well. All of the bell peppers, however, are either dead or stunted and sickly looking for no reason that I can figure out. So earlier in the week we cleared the garden space and I planted turnips and some more radishes. Speaking of radishes, one of the varieties I planted this year are purple all the way through, malaga they are called. They grow well and unlike the red ones which have a tendency to split, stay round and firm. They do, however, have a bit of bite to them, not so hot to make your mouth burn but enough to make you take notice. Crunchy and a little peppery, they are marvelous sliced up on a sandwich with tofu or tempeh. I wouldn’t want them in a green salad though, I don’t think they would play well with mild flavors. Of course, you might think otherwise if you are a hot radish fan. Regardless, I highly recommend growing them if you have a little patch.

Are there potatoes under all that straw?

The potatoes are also growing like crazy. This is the first time I have grown any so I hope I am doing it right. I keep mounding up straw and the plants keep getting taller and taller and I add more straw. Are there potatoes in there under all the straw? I hope so but I won’t be able to find out until after the plants begin to die back. That doesn’t look like it will be very soon but I can’t say for certain. I just watch and mound up straw and wait and hope for the best. A lot like most things I do in the garden.

Squirrels and rabbits have been a bit scarce around the garden lately. Why? Remember the hawk nesting in my neighbor’s tree? There is now a baby. It can kind of fly between the nesting tree in the backyard and the big oak tree in my neighbor’s front yard. I haven’t managed to see it yet, it is careful to keep hidden in the leaves. I can hear it just fine though. Hawks aren’t songbirds and don’t tweet or chirp. So imagine the sounds you’ve heard raptors make, scale it down and raise the pitch to that of a squeaking door and you will come close to what this baby sounds like. And it being a hungry impatient baby it makes quite a lot of noise! Still, it is great fun having it around and I wonder if the parents will return to nest in the same place again next year. If so, I will have to be very careful that my chickens don’t give the impression of being a good dinner.

Last week we experimentally seeded buckwheat in the sand of the chicken garden. While morning glories and grass

have already begun to sprout, I did not have high hopes for the ability of anything desirable to grow in all that sand. But Friday I went out to check and there were sprouts! I watered them, then watered again yesterday, and today they are coming up really strong. Hooray! It’s going to take more than buckwheat sprouts to make the sandbox a garden, but it is a beginning.

We have bought the shed kit we are building for storage of bikes and garden tools and it will be delivered on Thursday this week. It comes with all the screws and nuts and bolts and pre-drilled holes, etc, like IKEA furniture. Bookman and I are actually pretty good at putting together IKEA furniture, how will we do with a shed? It can’t be that hard, can it? Four walls, a roof and a door. Hopefully it won’t take us long to get it all built. Once it’s up, or at least mostly up, I can mark out more areas to sow buckwheat. Stay tuned…

Another crash-free week for me and Astrid. The riders in the Tour de France have not been so lucky. There have been loads of crashes and a number of riders have had to drop out because of broken bones. Yikes! My scrapes are almost all healed and my bruises have turned all kinds of lovely colors and are just beginning to fade. I can wear a skirt again and not make people gasp in horror.

It was a warm and humid day for my long ride yesterday (55 miles/88.5km) so I left a full hour earlier in the morning than usual. I felt really good and was sure when I was done that my sprint intervals would have gotten me personal best times and that I surely had managed to average 15mph/24kph, a goal I have set myself as I have been hovering so very close to it for the last few rides but not quite making it. Well, once my ride data was uploaded I found I didn’t make it yesterday either. Nor did I get personal bests. I did beat my QOM time on my favorite hilly segment by four seconds though so that was something. Still, I was a bit disappointed. Even though I felt good I guess the humidity had more of an effect than I expected. Oh well, there is always next week when I will try again!

Have any of you ever ridden in a Gran Fondo? There are three in Minnesota that I have recently discovered. They aren’t exactly races but they are run like races and riders get a tracking chip and are timed. It’s like the chip runners get in their timed “race” events. There is a Gran Fondo in April as part of the Ironman bike ride. There is the Fulton Gran Fondo in May sponsored by the Fulton Brewing company in Minneapolis. The ride is followed by a beer festival and event participants get a coupon for one free beer. Then in September is the Life Time Gran Fondo sponsored by Lifetime Fitness and the Waconia Brewing Company. What’s the deal with bike events and beer? I don’t drink alcohol so I am a bit mystified. Anyway, the September ride is 60 miles/96.5km and I believe one or both spring rides are 100 miles/161km.

The Life Time Gran Fondo is a week after my 62-mile/100km Jesse James Day ride. I am tempted to do it. For my $40 registration fee I get a t-shirt, a beer (or a root beer), live entertainment at the finish line festival as well as a fully supported ride that includes aid stations (snacks!) and bike assistance. Plus, since it is timed, I suspect I will get a ranking among finishers which is very motivating because, as I have mentioned before, I’m kind of competitive. Plus again it will give me extra incentive to keep working on improving my average speed. What do you think? Should Astrid and I go for it?

23 thoughts on “How the Garden Does Grow!”