Goodness gracious! So much going on in the garden right now and so much to do! It seems like there is never enough time for it all but Bookman and I do what we can and that just has to be good enough. 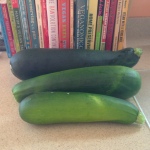 Before we went to Albuquerque last weekend we had been watching our zucchini plants flower like crazy and grow bigger and bigger. Where are the zucchini? We looked and looked and couldn’t find any. Well today I found some. Couldn’t miss them really, they are so huge. How could I not have seen them before? Zucchini bread anyone? Bookman will also be making zucchini latkes and if they aren’t terribly woody, there will be zucchini noodles too. And zucchini relish. I’ve been antsy to try making relish. So excited to finally have zucchini! Must now keep a close eye on them in the garden to avoid more like this. There are a few lemon squash out there almost ready to pick. A day or two probably. At least those are bright yellow, hence the name lemon, can’t really miss them.

Also before the trip, I was in a battle with the slugs over the potato plants. I went

away for three days which meant the slugs ate every single last bit of green. Today I dug through the straw to see if there were at least some small potatoes. As I was digging I discovered why I had such a hard time with the slugs. We used straw for mounding up around the plants and while the top layer was dry, beneath it was wet, and, judging from the number of slugs I exposed to daylight, a happy haven for them. Seems I provided a near utopian paradise. But there were potatoes! Not big, but quite a few, enough that Bookman and I have decided that we will try again next year. But next year we will not be using straw! 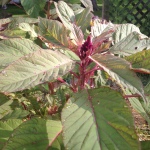 I planted a little patch of amaranth this year as a kind of experiment to see how it grew in our garden and to discover if it was worthwhile to make it a regular thing. Amaranth is a grain that is high in iron and calcium and higher in fiber than whole wheat. It’s a versatile little grain that you can cook up for breakfast or “pop” and use in salads. You can also make pudding out of it and all sorts of other things. I am not certain how much we will get from out little patch. It is a tall and pretty plant with think red stalks and red-veined leaves. It is just starting to flower. I am not certain how large the flowers will get, but it looks like they might get pretty big. Since it isn’t a grass I don’t have to thresh it like wheat or oats, I just have to dry the seed heads upside down in a paper bag and then shake out the seeds. Sounds easy enough. We’ll see if that is true!

Walter has quite a lot of crabapples on him for such a little fellow. They are getting ripe and I picked a few today. Can you say crabapple jelly? I’ve never made it before but Bookman and I are both very excited to give it a try. I have to go on a hunt for a good recipe. If you have one, will you share it with me?

The okra is also starting to get pods. I have never eaten okra before. I know a lot of 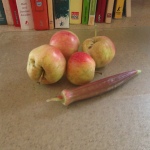 people hate it but there are many who love it. It is a highly mucilaginous vegetable that needs to be cooked just so in order to avoid the slime. I only have one plant so it will be a while yet before I have enough to actually do anything with them. Can I freeze the pods, does anyone know? If they are tasty I will plant more next year, especially since they are pretty plants.

Bookman called the fencing people we are contracted with to install chain link fencing around the chicken garden. We are still at least three weeks away from getting it installed apparently. Good thing I am not waiting for it to be installed before moving on to building the chicken coop! I drew out the plans of what we want it to look like and how big, where to put windows, roosts, access and egg doors and all that. Now we have to figure out the materials list which then might lead to a few height and size adjustments depending on standard lumber sizing and all that.

Bookman is going to call the city on Tuesday to find out if we can start building the coop now without having first gotten permission from the neighbors and going through the whole permitting process. Rumor has it the city is still planning this year on changing the requirement of getting your neighbors’ signatures. The city will still require a permit though because the coop has to be inspected annually. The city also requires a site plan submission so they can be sure

Hummingbird being overrun by morning glories

the coop is sited according to city code. I’m confident our coop location won’t be a problem, it is far enough away from inhabited buildings and well away from the garage of both my nextdoor neighbors. Plus there will be a fence before we have chickens and eventually there will be a screening hedge along the alley.

I want to finish the coop this year, but, if for whatever reason we don’t manage to, as long as we get pretty far along we will have time to finish it before the chickens move in. We will get chicks in March and they won’t be old enough to move out to their house until early to mid May. I think I mentioned the coop and the run will be covered with a green roof. Is it bad of me to have already begun thinking what plants I want to plant in it? Most people plant sedums but I’m not going that route, I have other ideas!

I missed my long bike ride last weekend, missed it mightily. But it is good to take a rest so as not to get burnt out and all that. I had a friend join me again this week for part of my ride, about the first 16 miles/26km. It’s amazing how fast the time goes when I have company and we are chatting the whole time. I’ve been working to up my average speed to 15 mph/24 kph and I am happy to say I did it! I am really pleased about this. By the time I get to my race at the end of September I should even be a little bit faster. So exciting!

I started doing interval training twice a week on a stationary bike indoors. Have you ever done interval training? It sucks. But it is supposed to help me be fitter and faster. You know you are in deep with a sport when you are willing to do stuff you hate in order to get better at it. Also, I need up my core workout. I’ve been doing free weights since early spring and they have helped build upper body strength, something I have never had much of, but I need to start doing even more focused exercises. Like intervals, this too sucks. I’m resigned to the weights, I don’t love them but I don’t hate them either. But I am not keen on doing side planks and a variety of other strengthening maneuvers, but I have to do them if I want to get faster and stronger. Maybe as a side benefit I will get some sexy abdominal definition? I’m getting some nice muscle tone in my arms, a friend of mine even remarked on it the other day out of the blue, so why not some abs? It could totally happen! However, this does not mean the core workout stuff sucks any less.

25 thoughts on “Battle of the Slugs and Giant Zucchini”