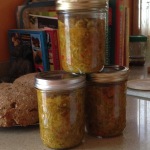 It is officially harvest and putting by season in the garden. I have so many dried beans to shell and still more to pick, I’ll be busy at it for some time. Have I ever mentioned how much I love beans? Definitely the fresh ones, but the dry ones to keep and cook in stews or burritos or other yummy dishes? You plant them the end of May and then except for the occasional water and weed, you pretty much forget about them and let them do their thing. I tuck them into places all over the garden, between bigger plants, in front of shrubs, in nooks and crannies. For dry beans you let them dry right on the plant. You know when to pick them off when the pods are brown and crispy. And beans are so beautiful too. I’ll have photos next week when I have enough shelled to make a decent picture.

Picked more cantaloupe melons from the garden this week. There is one small one left on 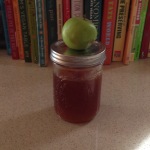 the vine with a bit more growing and ripening to do. I used to think a sweet melon from the market was good, but oh, just like vine ripened tomatoes, there is nothing like a melon picked fresh from the vine, chilled and eaten the same day. So incredibly sweet.

Speaking of vine ripened tomatoes, one of them actually got ripe! There are a number of others that are just beginning to color up. I also picked a couple of cherry tomatoes too. I think next year I just need to start the tomato seeds a couple weeks earlier, instead of mid-March, more like around Valentine’s Day. Now watch, next year I will end up with enormous plants by the time it is safe to put them out at the end of May and I will be complaining that I started them too early!

Still picking zucchini and lemon squash. Those will keep going until frost, sometime around early October. The pumpkins are going crazy and turning orange. There are a bunch of them this year and I can hardly wait until they are ready to pick just after frost (frost makes them sweeter). The Brussels sprouts are getting bigger and will hopefully be ready to start picking in a week or two. I didn’t realize the plants got so big and kind of crammed them too close together so instead of all six plants doing really well, there are two doing great, one doing okay, and the rest aren’t sure what they are doing (kind of like me sometimes!). 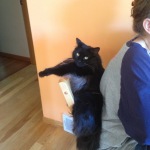 We started picking apples and last week Bookman made three pints of apple butter. Today he is making apple sauce. Last week he also made sweet zucchini relish. It came out so good! Tastes better than cucumber relish if you ask me, but then I am biased since it came from my garden! We have three pints and will probably make a few more. There was also success with the crabapple jelly! First time we have ever made it. Two cups of juice nets less than a pint of jelly, but hey, any little bit. The recipes call for one cup of sugar to every cup of apple juice so that’s what we did but the result is much sweeter than we’d like so next year Bookman will be cutting back on the sugar, maybe try one cup of sugar for two cups of juice. I don’t mind my jelly a bit tart, I’d rather that than too sweet.

We didn’t manage to get the final materials list together for the chicken coop last week, but we are close. The plan is to have it done today or tomorrow and then Bookman will go and order the lumber one morning during the week and have it delivered as soon as they can fit us into the schedule. That will hopefully be in time for next weekend so we can get started building it! 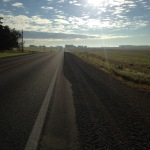 Yesterday was the Jesse James fun ride. Bookman and I planned on the 60 mile/100 km route. The day was forecast to be sunny and mild. We drove 45 minutes south with the bikes on back of the car. When we first moved to Minneapolis 20 years ago, we could drive 15 minutes and be outside the city and surrounded by farm fields. In a testament to urban sprawl, it now takes half an hour. 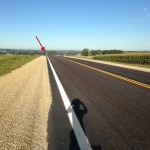 jackets instead of just wearing long sleeves. We worry so much about Bookman and heat with his MS and didn’t even think about the cold which, at a certain point, acts almost as detrimentally as the heat for Bookman. Only difference is he recovers quicker from cold than heat. We began the ride around 7:30 and quickly found ourselves out amidst rolling hills and fields of corn and soybeans. The sun took a while to break through some low clouds to warm us up, and in the process kept Bookman too cold for too long. He was really struggling for awhile. It didn’t help that we missed the sign pointing to a turn in the route and we, and a good many other people, went the wrong way for about three miles that included a long hill. The riders in front of us figured out we missed a turn and let us know. We stopped to look at the very poor map the ride folks had given us and a kind police officer who had been sent out to find all the riders who had missed the turn came up and helped us out. At least the way back to the route was mostly downhill!

Back on track, we wound our way through beautiful country. A tractor parade drove by on their way to the Jesse James Days festival. The tractors were decorated with little flags and the farmers were all smiling and waving as we passed. 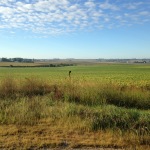 Our first rest stop was at the 22 mile/35 km mark. Bookman took a long rest and asked if we could take the 45 mile/72 km route instead. He’d gotten some energy back after being so cold at the start, but not enough to feel confident we’d make the longer route. He also wasn’t quite prepared for all the rolling hills (and there were a lot!). I was having a blast on the hills, a bit of a surprise really since the hills on my training ride are not my favorite thing but a necessary evil. But the work paid off apparently and there were only two hills that turned out to be real work.

Can I brag a second though? Even the hard hills I did really well on and passed people. The people I pass on hills though aren’t the really fit riders out with their really fit bike club pals, but the cyclists who are non-club sorts and tend to be larger men (as in very tall with big frames) or general recreational riding sorts and people who haven’t figured out how to pace themselves on hills. Still, it was great fun to pass people on hills especially when they were halfway up already when I hit the bottom and I pass before they reach the top. Bookman and hills do not get along at all. He did great though and made it up every single one without having to walk up. I’d wait for him at the top and cheer him on.

There were a couple of big downhills that were great fun. Country roads with hardly any 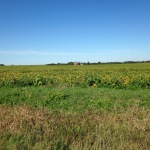 traffic and no stop lights or stop signs at the bottom of the hill meant I go fast and not worry about having to stop. Whee! Is that ever fun! Maybe because I’ve been riding all summer and feel balanced and confident on Astrid and maybe because I am just fearless enough that I don’t worry about crashing while zooming downhill, and maybe because I really like going fast, I’d hunker down over my handlebars to try and get more speed for as long as I could. Bookman found himself a bit unsure and, while he appreciated the opportunity to rest, he didn’t quite get the thrilling whee! that I did.

While it didn’t turn out to be the great success and long ride we had planned on, it was still overall a very nice day. I loved riding out in the country, seeing all the farms and fields, smelling the skunks and the cows, waving at horses and goats watching me ride by, listening to the birds, crickets and cicadas.

I will definitely be going on the ride again next year. Not sure about Bookman, he’s rethinking the whole long distance cycling thing a bit.