My week long vacation is quickly drawing to a close. It has been really nice even though it has not exactly gone to plan. I was going to get all caught up with blog admin and visiting other’s blogs but I have hardly spent any time online which also has its benefits. I managed to get in some good reading time and I have done lots and lots of gardening. I am feeling rested and not overwhelmed by everything that needs to be attended to. We’ll see how long that lasts!

I tried to get Marianne on film doing her thing of jumping onto my back, but of course she refused to perform on demand. It might be because they have been free ranging in their garden all day so she was distracted. I did take some video of them this morning as they were out scratching in the leaves and eating daylilies. The red/brown one is Elinor, the all black one is Margaret, the white headed one is Marianne and the black one with the white speckles is Mrs. Dashwood.

They are one week shy of three months old now. In a week or two we should be able to start to tell if any of them are stealth roosters. We will know by their feathers, apparently. Fingers crossed none of them get renamed Mr. Willoughby, Colonel Brandon or Edward!

One of the things that was going to happen on vacation was giving the coop a fancy paint job. Bookman and I thought it would be great fun to do a faux stonework look but it takes so long simply to paint a coat of white primer onto plywood it just didn’t happen. Maybe later in summer or in early fall we will find the ambition to make Barton Cottage look like a cottage.

The garlic scapes got picked and most of them eaten in a delicious stir fry with soba noodles, Japanese turnips and tempeh. There are still a few left to get mixed into something, not sure what yet, Bookman needs to put his chef hat on. 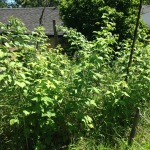 I got to spend lots of happy time in the garden this week. One of my goals was to weed the raspberry jungle. I have managed to get all around the edges but the thick middle remains unreached. It is hard work getting in there between the canes with their thorns pulling at my shirt and hat and poking me and making me yelp. It is looking better however, and that is a good start.

Because the weather has been warm and humid lately, the raspberries are getting ripe! They are black

raspberries and oh so delicious. This morning I went out to start picking the ripe ones thinking there wouldn’t be many, and returned to the house with an entire container full. They have been washed and put in the freezer to keep until ready to use. There are still a lot in the garden so when all is said and done we might have enough to eat fresh or cook into pancakes or muffins or put on cereal and make a small jar of jam. I am not sure jam will happen though given all the possibilities for them.

I have pea pods on the peas and hopefully in a few days they will be filling out and ready to start picking and eating. In spite of all the peas we have planted, it doesn’t look like it will be a banner pea year. It got too hot, too fast and they did not like it. But they might surprise me yet. I hope they do!

The potatoes are flowering and the plants are looking great. They didn’t look half this good last year probably because of the slug assault. This year they are slug-free and nothing else has been bothering them either so things are looking good for a nice potato crop. They have another two months to go so I hope I just didn’t jinx them.

The elderberry is flowering and looking quite nice. The serviceberry and quince have not flowered but they are much smaller than the elderberry and I suspect they are too small yet to expect anything of them. My gooseberries, still small shrubs, do have fruit on them though and they are beginning to blush purple. In a few weeks they should be ready to pick. I might get enough for a pie or a jar of jam. 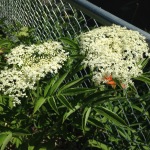 I have two currant bushes. One is red and the other is black. The red one has never fruited after about two years and was looking rather sad at the end of last year. This spring I moved it to a different location and clearly it is happier because it has a few small currants on it. Not enough to do anything with, but it is a good sign. The other currant has some fruit too but even combined there won’t be enough to do anything with all on their own. Perhaps I can combine them with the elderberries and make an elderberry and currant jam? We’ll see how much of everything I actually end up with.

The beans, cowpeas, zucchini, pumpkin and cantaloupe are all growing strong. None of the beets or carrots I have planted seem to want to sprout this year and the radishes are only making a half-hearted attempt. No idea what is going on with all that but I will keep trying and seed some more in August for fall harvest. I hope. 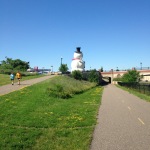 what the heck North St Paul?

I went on a long and lovely bike ride Tuesday. I treated myself to a Garmin Edge 520 bike computer with GPS and made myself a map on it to the Gateway Trail in St Paul. The trail is 18 miles/29 km of paved car-free trail that runs east almost to the Wisconsin border. The map I put on Garmin navigated me from my house and through the streets of St Paul to the trailhead. It is a beautiful ride with some interesting views along the way, like a giant snowman. My angle from the trail did not allow me to get a good shot of the somewhat demented look on its face. I don’t know why this fellow is there, he might be part of the “polaris” theme as I pedaled by a Polaris High School and Polaris Senior Living apartments.

My day was a lovely 62 miles/100 km round trip ride that was marred only at the very end by a little accident. Ten minutes from home I was forced to stop short to avoid being hit by a car. I was unable to unclip fast enough and get my feet under me before Astrid and I began toppling over. Down we went and I had the misfortune of hitting the pavement with my face. I chipped my two top front teeth and scraped up my chin and upper lip. The woman driving the car stopped and checked that I was ok, apologized and gave me a big wad of tissues for the blood all over my face. I did not realize I was bleeding so badly until she gave me the tissues.

What a sight I was when I looked into the mirror at home!

I called the dentist and got in that evening to see her. She did a thorough exam and I was relieved. Other than the chips my teeth were ok and she fixed them quickly and easily. I didn’t even need novocaine! She did tell me though that I had traumatized the ligaments surrounding the two teeth — did you know there are ligaments around your teeth? This was news to me! It will take about eight weeks for the ligaments to heal and during that time I am not to bite anything with those teeth. I am only allowed to eat with a fork and knife or a spoon or my fingers. I had toast at breakfast yesterday with my oatmeal and had to tear off bite-sized pieces with my fingers. This afternoon Bookman made vegan sausage sandwiches for lunch and I had to cut mine up with a knife and eat each bite with a fork. These next eight weeks are going to be really interesting.

My chin and lip got pretty scabby but all the scrapes have turned out to be mostly superficial and the scabs are coming off already. This is good. I won’t look so very frightful when I return to work tomorrow.

Astrid was not injured when we tipped over. We are both tough cookies. I was having some shifting trouble during my ride though and with the help of YouTube learned a bit about adjusting the front derailleur and fixed things right up. I feel so handy!

Hopefully the week ahead will be rather uneventful. Though our 13-year-old car began making some terrible grinding noises last week and repairs are going to cost more than the car is worth. Bookman and I went car shopping on Friday. We first considered going car-free and using a car sharing program, but the coverage area does not meet our needs so we have to buy a car. We will likely be getting a used Honda Fit come this Friday if all goes well. Wish us luck!