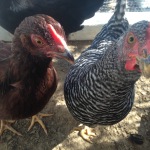 Is this thing on? Elinor and Mrs. Dashwood

Hi y’all! We survived the heatwave! It is still ungodly hot here but the humidity has dropped significantly and the excessive heat warnings have expired. It was a real grind of a week and I am convinced that trying to cope with excessive heat and humidity is a gazillion times worse than coping with dangerous cold. In extreme cold I am bundled up to the gills and I move along right quick when outdoors which generates heat and gets me back indoors again as soon as possible.

When the air temperature coupled with high humidity brings a heat index of 112F/44C, I am not allowed to go to work naked or even in only my underwear. Depending on your point of view, this could be a good or a bad thing. And moving fast to get back indoors to the air conditioning is impossible. I seem to be moving through some kind of thick, sticky gel so I slow down to sloth speed which doesn’t keep me cooler, only keeps me from not being hotter and takes a heck of a lot longer to get anywhere or to do anything. 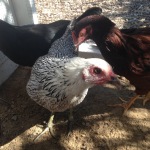 The poor chickens probably had it worse though since they don’t get the pleasure of air conditioning. To help the Dashwoods keep cool and hydrated we gave them popsicles made of frozen cucumbers and melon. We also added ice cubes to their water dispenser. And they got two little swimming pools. The pools are two small cat boxes that are going to be turned into nesting boxes in a few weeks. We filled each one with about an inch of water and set them in the run in shaded places. The intention is for the chickens to either stand in the water or walk through it to cool their feet which will in turn help cool the rest of them. I don’t think any of them ever stood in the water but I did see Margaret frantically run through a pool once. It was like she knew it felt good but she was terrified that Jaws or the Creature from the Black Lagoon was going to grab her from below. 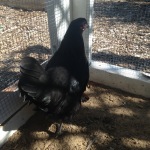 The terror is no surprise really. When we carried the pools out to put in the run it was early morning and the Dashwoods were still inside the coop. When we let them out of the coop they came down the ladder, spied these purple things in their run they had never seen before and freaked out. Elinor took flight (obviously we have not clipped their wings yet) and was stopped cold when she hit the wire around the run, whereupon she dropped to the ground like a rock, squealed and ran into the far corner with the other three. In the corner they all battled over who could smash herself furtherst into the corner. It was funny and sad all at once.

Since I was on my way to work, Bookman went back into the run and touched the pools to show them it was ok. He tapped on the plastic and then he splashed in the water. Their terror slowly abated and was then drawn to the watermelon popsicle that terrified them in a different way. The shape was familiar since they have had corn popsicles before, but the color was all wrong and thus required the utmost caution. After Bookman “pecked” on it a few times with his finger, they took their own sample pecks and decided the world was righted and on course once again. 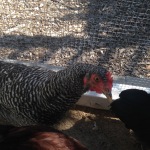 Mrs. Dashwood is getting her comb and wattle

Between the thick insulation, the vents, two windows and the green roof, the coop itself remained at a comfortable temperature. We are quite pleased about that especially since we weren’t keen on trying to rig up a fan in there in such a way it wouldn’t blow feathers and pine shavings all over the place. Green roof for the win! Except the only things that seem to be doing really well growing on it right now are weeds. How in the world did lambs quarters and crab grass get up there? Squirrels! I am going to blame squirrels. Pretty much all of the annual seeds we planted got washed away in early season torrential rain. A few pretty orange cosmos made it and are flowering but nothing else. The perennials we planted are at a 50/50 survival rate. The hens and chicks are doing great and the creeping thyme. The catmint and aster went crispy some time ago. The pasque flower has not yet decided which way it is going to go. In spring I am going to try adding some grasses and see how they do and a few more varieties of hens and chicks. Also, possibly, a pricky pear. 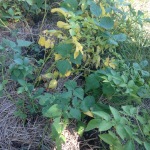 The potatoes did not do well in the heat even though we watered them. Most of them are officially fried. Fried potatoes. Heh. We have not yet checked to see if there are any small potatoes to be found under the mulch. We are waiting to see what revives and what doesn’t before digging.

It’s garlic harvest time! We pulled up a bunch and have a couple of pounds of garlic. Some of the heads are huge. The smart thing to do would be to save the really nice ones to plant next year. They are all strung up curing for a week or two and then we’ll see who gets to them first, me to save them or Bookman to cook them.

It is also bean time. They are just getting started and we added their tasty crunch to some tofu scramble yesterday. So good! Along with the first beans, we have also picked our first zucchini. We are looking forward to lots more of both. 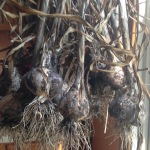 The pumpkins are starting to flower and the cantaloupe too. And the bush cherries are turning red and will be ripe in a couple of days. The crab apples are also getting ripe and we will be attempting crabapple jelly.

I love this time of year in the garden!

On the cycling front, no big adventures this week. I put Astrid on the trainer because it was just too hot outside. She and I have decided on our next great adventure. We are going to train for a 200 mile/322 km race next August. That’s 200 miles in one day. The Minnesota Challenge is part of the Race Across America qualifying series. The 200 mile route, however, is not a qualifying route, for that I would have to ride the 400 mile/ 642 km route (maybe in 2018?). And yes, that is a one-day race too.

From the race results for the past fours years it appears there has only ever been one solo female finisher and that was in 2012. But then it appears that there are never more than one or two women a year who even start the race. So hey, if I can finish, I will very likely be the female winner!

Astrid and I like to take on big challenges so we are excited. Bookman, he’s a bit more cautious. He’s not keen on the idea but since I get to have a support car follow me through the race (kind of like the team support cars in the Tour de France) to help me with flats, mechanicals, food and water, he feels a bit better about it because at least he gets to keep an eye on me.

If you are wondering why I am crazy enough to even think about doing this race, I am working on an essay for Vocalis and hope to have that done soon.

That race is a year away, August 2017. In the mean time, Bookman and I are registered for a fun ride, The St Paul Classic, a ride we can do together. That ride is on a Sunday in September and depending on the weather we will do either the 15-mile or 30-mile route. The day before that ride I will be doing the Jesse James century ride (100 miles/161 km). Bookman will not be riding with me on that one. I was hoping the 60 mile/100 km gran fondo that was cancelled last year would be back on this year but so far their website has no registration information. I am on the waiting list for a spot in the Filthy 50 gravel race in early October.

Those are my “official” ride plans for the remainder of the outdoor cycling season. My unofficial riding will be dedicated to more exploring of new routes like taking the Mississippi River Trail north to Elk River and maybe when the leaves begin changing going to Marine on St Croix. Lots of fun to look forward to!

30 thoughts on “We Survived the Heatwave”