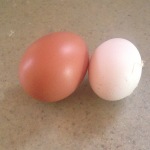 We have another layer! This time the eggs are a darker brown and we know for certain it is Elinor because she hunkers down for a while in the nesting boxes and then when she leaves there is an egg. The other one is still laying in the corner of the coop but that’s fine. Even though the eggs are a very light tan, we are now pretty sure it is Marianne, the very one we were so sure it wasn’t. We were sure it wasn’t her because she is an “Easter Egger” and her eggs are supposed to be blue or green (they can be either for this breed). But we are pretty sure the light tan eggs belong to her because she was in the coop this afternoon hunkered down in the corner for a while, came out of the coop making a lot of racket, and we looked and there was a still warm egg in the corner. Maybe as she matures the egg shells will change color? Or maybe they will always be a very light tan. No idea how this works.

Today was coop cleaning day. I had all the coop doors open, removed the lower roosting pole — the Dashwoods still haven’t learned how to roost, preferring to hunker down together in their favorite corner — the nesting boxes, everything. Then I raked out all the bedding and put most of it in the compost bin but some of it in the garden under an apple tree. Then I scrubbed the coop walls and floor. During the scrubbing Elinor flew in the open egg door to see what I was doing. She walked around inspecting things and stood watching me for a bit. Then she began chattering at me, scolding me for taking so long because it was getting close to her egg time. I hurried up, got the nesting boxes back inside and she climbed right in. I didn’t have the bedding in the rest of the coop yet because Elinor was in such a hurry. I backed out and gave her a bit of privacy.

A few minutes later she left the coop and I checked the nest, no egg. False alarm. So I started putting bedding in the coop. Just as I was finishing up she came in again. I closed up all the doors and let her be as I started cleaning up in the run. She came out a few minutes later. No egg. Another false alarm? Or just too much going on and she is a shy layer needing quiet? Once I was finished in the run and not doing anything around the coop at all, she went back in. She was in there a long time. I poked my head in to see what was up and she was hunkered down in one of the nests and looked at me like, “what?” It took her a while longer, but she finally laid the egg and came strolling out of the coop as though nothing had happened. Very low key our Elinor unlike Marianne. 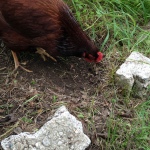 I spent a good part of the day out in the garden. The weather was partly sunny and the temperature comfortable. When they were chicks Mrs. Dashwood was my favorite and has continued to be but this week she has been supplanted by Elinor. Since we have begun allowing the Dashwoods into the main garden I have noticed that Elinor likes to come and see what I am doing. After spending time in the garden yesterday afternoon and today, Elinor has begun following me around. She has figured out that I do things that usually result in something interesting like bugs. Yesterday I was trying to pick beans and she kept coming up trying to take them from me.

Today, Margaret saw Elinor following me around and decided to join us. I ended up weeding for a couple hours and the pair happily “helped” me. They went wherever I did and when I’d pull out weeds and grass they would get right down next to my hands looking for tasty morsels. And they got plenty. After I cleared a spot of weeds they would continue working the area, scratching and nibbling. 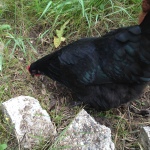 Picture this, I am kneeling and bent over tugging on weeds. Elinor, nonchalant as could be, ducks under my extended arm and fits herself beneath me, watching as the roots of the weeds come up from the dirt. I can no longer see the bed because I have a big chicken right in front of me with her head down looking for bugs. I have to move over away from Elinor so I can see to grab more weeds. She comes back under my arm again as I work to watch for skittering snacks when the ground gets disturbed. While this is going on with Elinor, Margaret is standing next to my arms and has her head down by my working hands so close that I am afraid if a root suddenly snaps loose I might smack her in the face.

We were all having such a lovely time of it that I was reluctant to stop even when my allergies were starting to rear up and my energy began to flag. I kept going a little longer before thanking them for their help and going indoors to take a shower.

Mrs. Dashwood and Marianne kept Bookman company out in the chicken garden as he was spreading some fresh wood chips and doing a general tidy up in and around the shed.

I am still picking pole beans, they just go and go! More zucchini and a few tomatoes. One of the pumpkins is turning orange and there are two cantaloupes that have made it to baseball size and will hopefully keep going. The bush peas I planted are flowering. The plants are about a hand’s length tall. They are called “Tom Thumb” so I am not certain how tall they will get. Nor and I certain how productive they will be. Flowers are a good sign that my questions will eventually be answered. 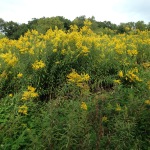 A short 56 mile/96 km ride yesterday. The goldenrod is blooming everywhere and the feathery sunny yellow flowers had me smiling nearly my entire ride. It was a windy day too but even the wind couldn’t make me grumpy. The one thing that did cast a shadow happened 3/4 of the way through the ride. My chain slipped off my big front ring onto the smaller one and I hadn’t even shifted it. When I tried to shift the chain back up to the big ring it wouldn’t go. I fiddled with adjusting cable tension but only succeeded in messing up my rear shifting too. Sigh. I got home fine on the gears I could use. There was nothing wrong with the derailleur that I could see, just needed adjusting. So the nice folks at the bike shop were kind enough to do a quickie for me free of charge. I love the Hub!

In the spring I am going to be taking a number of bike mechanic classes so I can learn how to do all this myself. Also, I am thinking of working towards becoming a certified bike mechanic. I really enjoy fixing things and want to know how everything on Astrid works and what to do when it doesn’t. Not only will it be handy, but there might also be a future job in it somewhere. One just never knows.