After a long, cold winter I figured the Japanese beetle grubs would have been sufficiently killed off that I could look forward to an invasion-free summer this year. Nope. According to the University of Minnesota Extension Service, the cold does not affect the grubs. Great. Their advice is to pick the beetles from whatever they are eating because the traps, which use pheromones to attract the beetles, only attract more beetles.

But what do you do when, once again, they are attacking your honeycrisp apple tree that is heavy with apples for the very first time in the five years since you planted it? It’s not like there are one or two beetles, nope, there are bowls-full. And when I pick a bowl full one day, there is another bowl full to pick again the next day. For the last month and half every night after dinner I go out into the garden and pick Japanese beetles off my apple tree. When I close my eyes at night, this is what I see:

And of course, they don’t just stay on the apple tree. They did at first, but now that my apple tree looks like this: 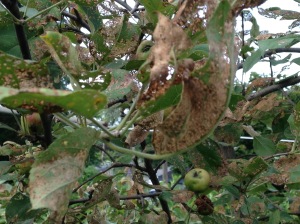 they have ventured forth to find other things to eat, like my beans. And the crab apple. And the Virgin’s Bower vine. And the raspberries. They have nibbled on my grapevine but have not gone further than that. I think their lifecycle is finally on the down swing or they have decided they have had their fill of my garden, because their numbers appear to be slowly decreasing.

My beans will be fine as will my raspberries and the crab apple tree. My honeycrisp tree is a loss. The tree is still alive, but all those apples are falling off and rotting because there are no leaves left to feed them. I knew this would happen, it is what happened last summer when the tree had apples for the first time. And so every night of beetle picking is a fruitless undertaking because I knew it would not save the apples. But I had to pick beetles because if I didn’t, they would have been worse and gotten to the other plants in my garden more than they have.

I have learned that I can inoculate the garden soil with milky spore bacteria. Apparently when the grubs are underground eating roots and whatnot, they ingest this bacteria and it kills them. The bacteria is completely natural, won’t hurt my garden plants or veg, won’t hurt me or the Dashwoods, only the Japanese beetles. We have to put it around the entire garden. Supposedly the inoculation lasts for up to ten years.

I have no idea if it will work or not. Regardless, the honeycrisp tree is going to go. It is the main beetle attraction two years running and if it is no longer in my garden then perhaps it will also keep the beetles from being such a time consuming and garden consuming pest. And if the milky spore does not work, I cannot face the prospect of another summer spent picking Japanese beetles off the tree every night. I am very sad about taking the tree out, but all these beetles aren’t coming from my garden alone and even if the milky spore kills the grubs in my garden the tree is likely to attract beetles from around the neighborhood.

On the plus side, in the space where the tree is, we will move our two bush cherries that are getting larger and crowded in their current location by raspberries and sunchokes. So in that respect, it will be a win.

If removing the honeycrisp and milky spore bacteria solves most or all of the beetle problem, I will be happy but the Dashwoods will be sad. They have been the nightly recipients of the bowl of beetles. They stand at the gate when I am out in the garden, cooing in anticipation. When I walk into their garden with my bowl they get so excited that they fall all over themselves. It takes them less than two minutes to eat all the beetles that I spent an hour picking into my bowl of water.

Not to be outdone by the beetles, the grasshoppers this year are enormous. I have caught two in as many days that were as long and fat as my thumb. The Dashwoods gobbled them down and looked at me for more.

The garden has grown up enough now that I let chickens out to roam in it. So far they have been behaving themselves and not eating my beans or zucchini or digging up my radishes. I’ve been keeping an eye on them though to make sure. I am hoping they will find grasshoppers and grubs to chow down on.

If it sounds like the garden has been a disaster, it has not. There always seems to be a balancing. While the honeycrisp is a goner, the cherries are fantastic. The beans are going great. The pumpkins are aiming to take over the world but the zucchini won’t let them without putting up a fight. The shiso is beautiful. The tomatoes are doing great this year after several years in a row of being disappointing. I am pulling up garlic and in a couple weeks will be digging potatoes. Every once in a while I pull up a giant radish. There will eventually be some carrots. It also appears that I might get a cantaloupe or two. And even though the beets are still only sparsely leafed and three or four inches tall, I am hopeful that they might eventually get somewhere, which would be a first from my garden.

In an attempt at fall crops, I have planted more radishes, carrots, and turnips. In two or three weeks I am going to seed some lettuce, mustard and kale. I’ve never had luck with planting for fall, but if I keep trying eventually I will find out what works and what doesn’t.

Cycling in July has been marvelous. The weather the last several weeks could not have been more perfect — not too hot, not too humid, not too windy. The heat is going to reappear by the end of this week, just in time for the first of two cycling events. This coming Saturday is a 100 mile/161 km charity ride for a local school district. I had signed up for the event at the request of a friend who is now unable to go because her husband is taking an unplanned trip out of town and she is unable to arrange babysitting for her kids. But that’s ok, it will still be fun.

The following weekend is a 24-hour race. This is my big event for the summer and I am really looking forward to the challenge of it. I talked to a friend who has done it several years running and she said the night time hours are the best. The streets are quiet and the temperature is cool and you can really rack up the miles. I have not ridden much after dark so it will be a new experience for me. I will have my bike headlight, taillight and I have decorative purple lights on my wheels that will be fun. It’s a big event so there will be plenty of other cyclists riding through the night. I had convinced another friend to sign up with me, but he won’t be able to ride due to health problems.

It sounds like all of my cycling friends are abandoning me but this is not the case. a couple weeks ago I had a fantastic group ride with several cycling women friends, one of whom was here from the east coast visiting family. We had a great time, rolling along at a good clip and chatting away. What could be better? 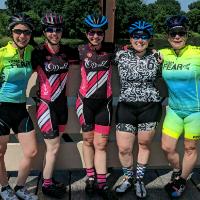 23 thoughts on “The Beetles”