Rumors of my demise have been greatly exaggerated!

Here is a bit of what I have been doing.

In August, I did a 24-hour bike race. The Powderhorn 24. Completely bonkers and totally awesome! The race began on a Friday evening at 7. Here is me ready to go:

It ended on Saturday evening at 7. Here is me afterwards: 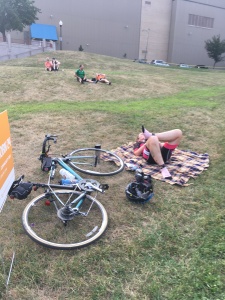 A point was awarded for every completed lap. Each lap was just short of five miles. Two points were awarded for every bonus vacation stop. Vacation stops were off the course, generally not far off, and had an activity that had to be completed. The vacations were only open for a particular time period. So, for instance, between 8 and 10 pm I could stop at checkpoint number one where I had to weave my way between barrels in a parking lot. Between 9 and 11 I had the opportunity to toss old bike tires over someone’s head like a ring toss. I had to get three before I could get my points. There was early morning yoga, a disco dance party, a kiddie pool and fizzy water to drink in the heat of the day, you could even get a tattoo. I did not want a new tattoo so thankfully it was enough to stop at the tattoo shop, though it would have been awesome if they had temporary tattoos on offer as well, I totally would have gone for one of those.

It was all great fun! Yes, I was tired. Yes, I was sore. But, I came in second place for the solo women! I lost by one point because I missed a vacation stop in the middle of the night when my eyes were so blurry I couldn’t see the words on my list of checkpoints. The woman who came first and I were switching places on the leaderboard the whole race and we’d see each other out on the course now and then and egg each other on. She had done the race once before so knew what to expect. I made a few mistakes from lack of experience. Which means next year, she will not get first place.

I got a big bottle of champagne for my pain, suffering and lack of sleep. Since I don’t drink I gave the champagne to my nextdoor neighbor when he had some company over and they all enjoyed it very much. 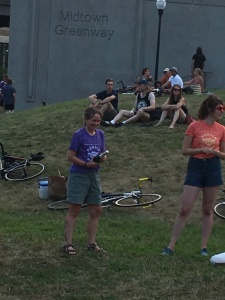 There has also been gardening. 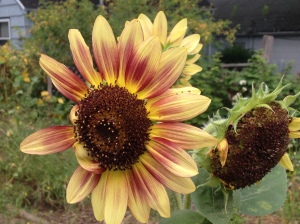 This sunflower is from seed I save from last year’s sunflowers. It is a cross between a Lemon Queen and Floristan. If you ever want to have some great fun, grow a couple very different sunflower varieties and save the seeds from a few of them, plant them the following year and see what you get. Sunflowers cross breed very easily and it is a fun surprise to see what happens. I liked this one so much I am saving seed from it for next year. I didn’t grow a big variety this year so I am hoping the flowers next year don’t look very different.

This giant sunflower is not from saved seed. It is about 10-feet tall and has one huge flower and a number of smaller side flowers. It is a variety called Arikara. It is an edible white seed variety grown by the Arikara nation in North Dakota. The bees and butterflies love it as much as I do!

There has also been a big bowl of elderberries we are making into jam as I type. I had to share more than half of the elderberries with Marianne. She loves them! And since the shrub grows out in the chicken garden, she gets all the berries she can reach, which is quite a lot as the shrub is not much over a meter tall. I have never had elderberries before and I am very much looking forward to trying them!

And we also got a bucket of grapes.

The grapes are table grapes, seedless and sweet with a tiny tart aftertaste that is wonderful. They are not large grapes though and Bookman decided he wanted to make jam. Since there are so many we are in the process of trying a few different methods in small batches to see which one we like best. We do not add sugar which can make things challenging in terms of setting up. But we are not looking for a thick jelly, we are looking more for a fruit spread.

The first batch we whirled through the Vitamix and cooked on the stove with half a cup of chia seeds. It tastes great and has the consistency of apple sauce. Currently on the stove is another batch that has simply been mashed and is being cooked with a couple of crab apples from our crab tree. Carb apples are high in pectin. We will see in a little while how it turns out in terms of thickness and flavor.

The potatoes have been dug and the garlic pulled. We have a big basket of dry coco noir black beans and black-eyed peas to shell.

The garden is winding down a bit. There are still carrots growing and pumpkin. Lots and lots of tomatoes this year too. Once we get a frost in a month or so we will dig up some horseradish and sunchokes.

At the moment the giant hyssop is blooming and is covered in bees and monarch butterflies.